This imposing laptop sports seven inbuilt screens and was designed for use as a mobile security operations center, could be good for stock trading too though! 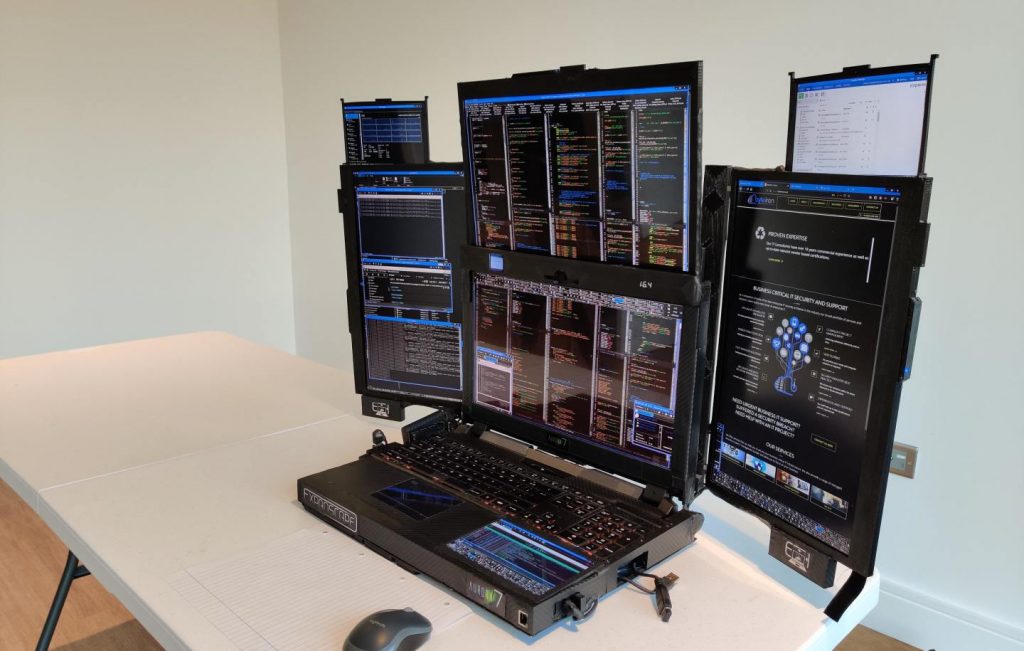 Your main screens on the Aurora 7 are the four 17.3-inch 4K displays. Above both the left and right-hand screens is a single seven-inch 1200p monitor, with one more seven-inch 1200p touchscreen display located to the right of the device’s touchpad.

The result is an obscene looking laptop that would look more at home in the Matrix than being used by a developer.

Add some more, don’t be shy

Unsurprisingly, there are several downsides to having so many integrated screens on a single device. For example, it weighs 12kg (26.45 lbs) and requires two internal batteries, with one entirely dedicated to powering its monitors. When unplugged from mains power you’ll get around 140 minutes of battery life, though this estimate will be affected by what you’re actually running on the machine.

The Aurora 7 runs on an Intel Core i9-9900K processor and has 64GB of DDR4-2666 RAM. It also has an NVIDIA GeForce GTX 1060 inside, so you could possibly get away with playing a few rounds of Apex Legends on one of your many displays. It should go without saying that this isn’t intended for use as a standard office laptop or gaming device, so this is unlikely to replace your current setup, regardless of how desperately it might need updating.

Unlike many prototypes, you can actually order an Aurora 7 if you sign a contract and a non-disclosure agreement, so if you need this multi-monitor monster in your life then you can apparently get your hands on one.

A warning on putting in an order though as there isn’t a public price listed for the concept laptop, with Expanscape stating that “pricing will reflect the costs and development involved and the fact that we are in the very early stages of our prototype’s development.”

While it certainly isn’t practical for most of us, we’re interested to see what developments occur for the Aurora 7, and what it could mean for possible future laptops. If the Asus ZenBook taught us anything, it’s that having additional displays can be a real success on a device if designed correctly, and having more screens will allow us to open more Twitter tabs while we work.