Microsoft released Windows 10 version 2004, also known as the May 2020 Update. The new feature update for Microsoft’s Windows operating system is available for systems running Windows 10 version 1903 or 1909 only via Windows Update, and only if users click on the “check for updates” button to search for the new version manually.

Even then, it may not be offered to the system at that point in time because of issues identified on the system and because Microsoft is rolling it out over time. In other words: the update is only offered if Microsoft’s algorithm concludes that the device is ready for the update and if your device has been picked by Microsoft. 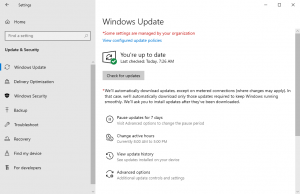 Microsoft published a long list of known issues that have not been resolved yet on the official Windows 10 release information page. A total of ten issues are listed on the page currently; many block the new feature upgrade from being offered to devices.